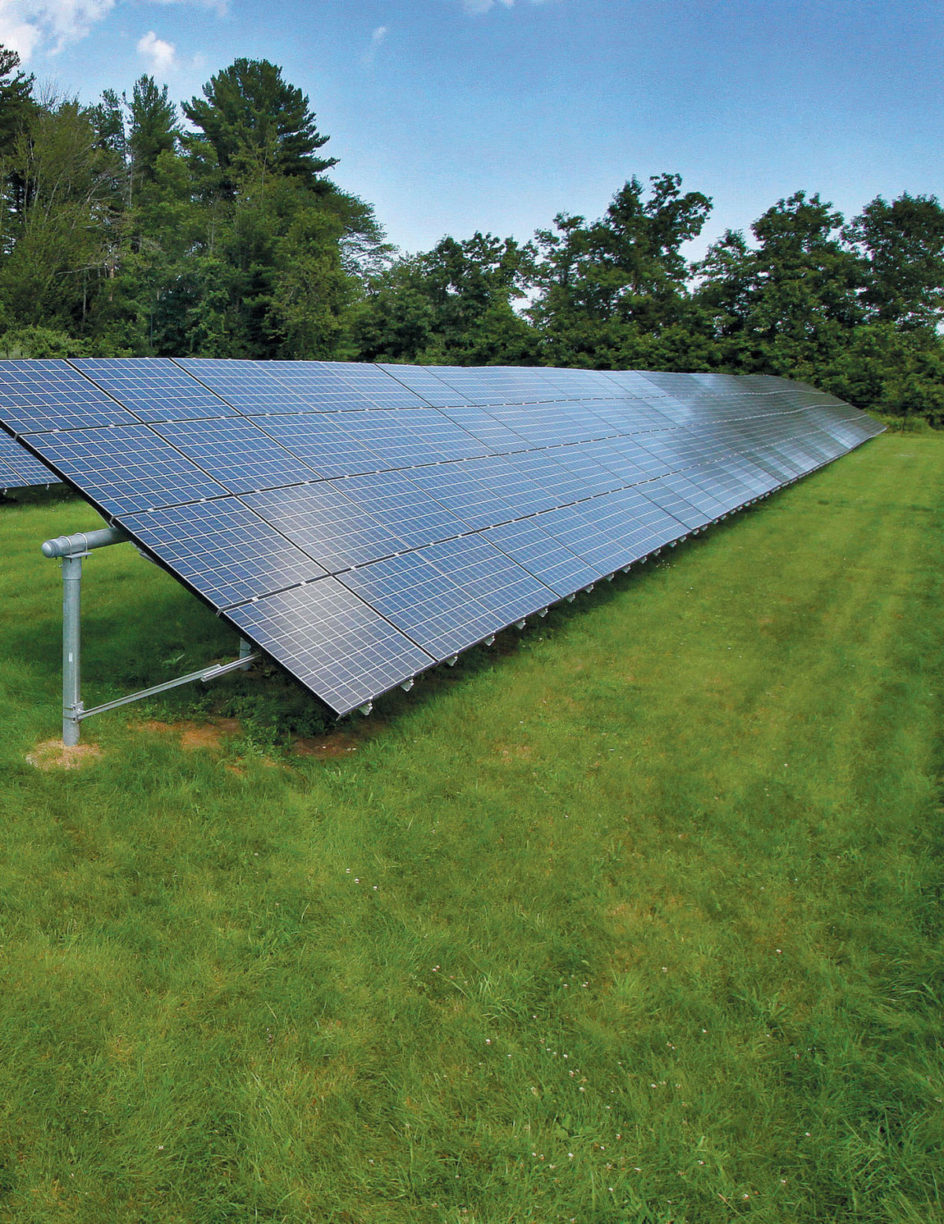 “I think one of the things that attracted me to work in energy is that it affects so many aspects of our lives,” says Brianna Brand, reflecting on what drew her to her current role.

“Our overarching mission is to strengthen New Hampshire’s economy and preserve (the state’s) resources by promoting a transition to clean, efficient and renewable energy,” says Brand.

BIG CHANGES ON THE HORIZON

In her mind, there couldn’t be a better time to be doing this work, which is critical to New Hampshire’s future in myriad ways. She sees the stars aligning, so to speak, when it comes to making big changes in the state’s approach to energy.

“This is really sort of a turning point where we have the technology. Costs are improving, which is great. It’s constantly getting better and better,” she says.

At the same time, she believes people in New Hampshire want to move toward sustainable energy options and keep their energy dollars local.

“We’re seeing lots of interest from all sectors. It’s all sort of coming together,” she says.

NHSEA is the only organization in the state that solely focuses on clean energy and sustainability, and it has brought together a diverse range of members, including more than 300 individuals and upwards of 100 businesses.

“We’ve been increasing exponentially with our business members,” says Brand; she notes that a growing number of organizations from other states, such as Massachusetts, are looking to expand into New Hampshire.

“They’re coming to us for resources and help with the market. We’re trying to make sure that they have the regulatory environment so that they can succeed,” she explains.

NHSEA’s business sector encloses the New Hampshire Clean Tech Council, which advocates for the continued growth of clean tech within the state. Members include law firms, financial groups, and businesses from a variety of other fields.

To keep the state moving toward increased sustainability, NHSEA takes a two-pronged approach, focusing on both policy and education.

“When we have, for instance, policy issues where there’s different options, what we try to do a lot is reach out to our members,” says Brand.

They ask stakeholders what makes sense in relation to the industry’s current status and what the best next move would be.

“We really try to be a very open nonprofit,” says Brand.

A recent policy issue that NHSEA was actively involved in was net metering. It took more than a year for the decision-making process around the topic to be finalized.

“It was a really highly contested docket. There were a lot of different groups with really differing interests,” notes Brand.

NHSEA kept its members informed and vocalized their concerns throughout the process.

“NHSEA really stepped up to the plate and had a leadership role,” says Brand.

Net metering is the rate that utility companies reimburse consumers for their excess energy (that is generated from renewable energy). An example would be a home with solar panels that produce more energy than what’s used within the household.

The controversy about net metering centered on whether the current retail rate would change drastically. In the end, the full retail rate was kept with a certain percentage being detracted from the distribution charge, making it about 3.5 cents less than what people receive now.

Brand says the outcome took into account the opinions of several key groups and added that “overall, it was good for the industry going forward.”

NHSEA IN THE MONADNOCK REGION

On a more local level, NHSEA also played a supportive role in the Monadnock Food Co-op’s community supported solar project alongside other key organizations, such as the Monadnock Sustainability Network (MSN), which managed the two year initiative in collaboration with Antioch University New England. MSN then used the project to develop a model for other organizations that may wish to pursue installation of a renewable energy system.

Strategies like that one, which provide education and resources, are critical in moving more individuals and organizations toward sustainable choices, a reality that NHSEA is also well aware of.

“We provide a lot of resources for homeowners and businesses and municipalities that are maybe looking to invest in clean energy or maybe have questions about an existing system,” says Brand.

Many New Hampshire residents are looking for guidance after the Public Utility Commission’s (PUC) sudden freeze on the solar rebate program. The program is funded by Alternative Compliance Payments (ACPs) to the Renewable Energy Fund, and the ACPs fluctuate from year to year. In 2017, the ACPs dropped to approximately $3.6 million from $4.2 million last year.

“With the programs already on wait lists ($500,000 for the residential program and $1 million for the commercial program), the PUC decided to close the programs until they had reconciled the ACPs and established new program budgets,” explains Brand.

Although the halt in funding seemed abrupt, Brand notes that these programs have had “start-stop issues” in the past. She adds that it makes clear the “need for other sources of funding to ensure future stability and availability so that all NH residents and businesses can take advantage of these popular programs and generate their own local, clean energy.”

Funding and various other factors often force installers and consumers to work together creatively when it comes to moving renewable energy projects forward. One group that helps provide guidance and technical support for local energy committees and commissions is the New Hampshire Local Energy Solutions Work Group, an ad hoc group of energy professionals from various sectors that’s coordinated by NHSEA.

“It really helps strengthen the community impact for clean energy across the state,” says Brand; she adds that it’s empowering for communities to have a whole network they can reach out to.

In addition, NHSEA annually hosts the Local Energy Solutions Conference in the fall. The day-long event, which takes place at the Grappone Center in Concord, incorporates a keynote address, panel discussions, expert insights, exhibitors, and more.

“It’s really a great way for anyone who’s involved in energy in New Hampshire in any way to come and network and learn,” says Brand.

NHSEA uses the event as an opportunity to share information and updates, which attendees can then take back to their communities. This year’s conference will take place on October 28; information can be found on NHSEA’s website, www.nhsea.org.

For 2017, NHSEA will be sharing updates about New Hampshire’s new Energy Efficiency Resource Standards, commonly referred to as the EERS.

“Basically what that does is it sets targets for New Hampshire to save on efficiency over a three-year period,” explains Brand.

Passed in the middle of last year, the new standards will have an effect on the programs offered to home and business owners in the state. NHSEA has been reaching out to businesses to ask for their input, and the association hopes to provide more information about innovations and changes related to programming by the end of the year.

One of NHSEA’s biggest goals related to efficiency is to try spread awareness. Brand says that things like solar energy are popular and visible right now, but efficiency isn’t such a hot topic.

NHSEA is focused on making more people aware of existing efficiency programs, such as New Hampshire Saves, and getting more people to take advantage of them.

For instance, rebates on energy-rated appliances, high efficiency heating and cooling systems, and weatherization options to reduce energy bills all fall within this realm. By educating home and business owners about the benefits and savings that are available, NHSEA hopes to keep Granite Staters on the path to sustainability.

The organization is also exploring ways to provide pertinent data related to the clean tech industry to help inform New Hampshire’s energy decisions going forward. The Clean Tech Council published a report in 2015 that looked at economic activity within New Hampshire’s clean tech industry, and it showed job numbers and wages coming in above the state average. Brand would like to publish a new report with the latest figures in the near future.

In addition, she says, “We’re working with the Department of Resources and Economic Development to also look at the economic impact of the industry and how it contributes to our overall economy.”

More information about NHSEA’s current initiatives, memberships and events is available on their website, www.nhsea.org.