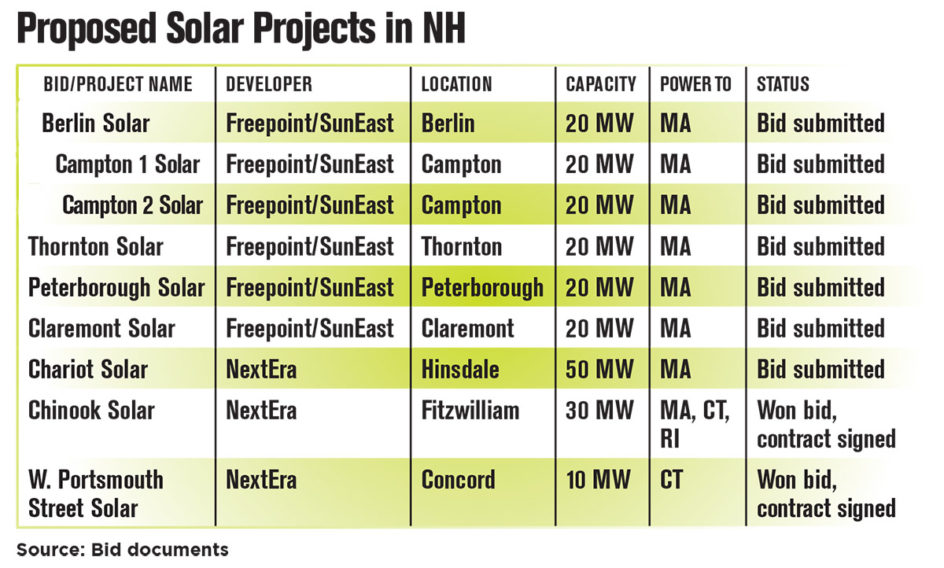 When Edwin O. “Smokey” Smith sold an option for 47 acres of his grandfather’s farm in Hinsdale to become a small part of what could be the biggest solar farm this state has ever seen, he was doing it more to save for retirement than to save the world from climate change.

“It’s a little extra money,” said Smith, a Republican who served seven terms in the NH House. “If someone was going to put a house up there, I’d sell it too, but this is helpful for the town. It creates jobs. It pays taxes.”

The owner of that option —NextEra Energy, a publicly traded corporation with a $67 billion market capitalization whose holdings include Seabrook Station — hopes to make a buck on it as well.

Yes, you heard that right: The owner of a nuclear power plant that was once the target of national protests by anti-nuclear and renewable energy activists is now investing heavily in renewables. NextEra is not only proposing to build several arrays that, if completed, would eclipse the state’s current entire solar output, it claims to be the largest builder of solar generation (2,000 megawatts) — and wind (20,000 megawatts) — in the country.

Indeed, all the projects being proposed in New Hampshire total 210 MW of capacity, triple the state’s solar capacity in 2016. And all of the electricity generated will be heading south, where the people are, where the political will for renewable energy is and where the money is.

Jaws dropped among New Hampshire renewable industry representatives after a presentation by Sustainable Energy Advantage, a Massachusetts consulting group at the Oct. 10 NH Energy Summit in Concord. The presentation listed proposed solar projects in New Hampshire that are 10, 20 and 50 times larger than the state’s biggest solar project operating to date — a 1 MW solar farm in Peterborough.

“These proposed projects are massive in scale,” said Jack Ruderman, director of community solar initiatives for ReVision Energy, the state’s largest solar company. “If any of them come to fruition, it would be a huge step forward for the solar industry in New Hampshire, and a boost for the state’s economy as well.”

The huge projects are the result of a bidding war driven by the regional hunger for renewable power, a war that includes traditional utilities like Eversource and National Grid, with such projects as the Northern Pass and Granite State Power Link transmission lines, as well as nine utility-sized solar projects.

In March, Massachusetts issued a request for proposal called an 83D, soliciting 20-year contracts to generate about 9.5 terawatt hours per year. By the end of July, the 83D bid request attracted some 46 bids from as far away as New York and Canada, including six transmission projects, 1,800 MW capacity of wind projects from Maine and a 280 MW wind project off the coast of Martha’s Vineyard. The seven solar projects in that bid, totaling 170 MW might be small in comparison, but it would be a quantum leap in solar in this state.

In 2016, the combined solar capacity of all of New Hampshire barely topped 60 MW. Currently, almost all of the solar projects are built or leased by homeowners, businesses, institutions and towns to save money off their utility bills. This is decentralized power, the vision of most of those activists protesting nuclear power plants in the 1970s and 1980s.

Utility-scale solar, however, is built to make money by selling power to those very utilities with a centralized generating plant.

“You have to keep in mind, this is a different market. Net metering — that’s retail. This is really big wholesale,” said Kate Epsen, executive director of the NH Sustainable Energy Association. “They don’t cross paths very often.”

The sheer bulk of utility-scale solar could unsettle the state’s existing industry. For one, the projects will produce so much renewable energy that there could be less demand for renewable energy credits, or RECs, which utilities buy if they fail to meet renewable energy standards. Such RECs are often a key component for smaller solar projects, wind farms and biomass plants.

On the other hand, Epsen said, “the more projects on the ground, the more skills and acceptance for the industry.”

On the whole, she said, this is a positive development.

“I think solar works on different scales,” she said.

Take SunEast Development, owner of the other New Hampshire project competing in the Massachusetts 83D RFP.

It is proposing six solar arrays of 20 MW each, or 120 MW. Two would be in Campton, while the others are in Claremont, Berlin, Peterborough and Thornton. The projects are being financed by Freepoint Solar, a subsidiary of Freepoint Commodities, a $2.1 billion firm that trades in oil, coal and natural gas.

Those at the Connecticut-based SunEast are no strangers to the fossil fuel industry either. Reed Wills, chief operating officer, worked at Duke Energy, one of the largest electric power companies in the United States. Duke was involved in some solar projects that are measured in square miles, not acres, Wills said.

“Duke showed me how large-scale solar, done professionally, can work,” said Wills. It is all part of the transformation that “started out as mom-and-pop rooftop. It is now becoming a competitor to coal and natural gas, very much like wind did a few years ago. The utilities aren’t the fastest to get involved in this, but usually they catch up.”

In its application to the Massachusetts 83D RFP, SunEast said it has land options and talked to public officials, but hasn’t submitted anything formal to localities or the state.

SunEast’s Claremont proposal is the furthest along, he said.

Nancy Merrill, the city’s director of planning and development, likes the concept.

“When Wheelabrator [a trash-to-energy incinerator] closed, we thought it would be nice to do something different with energy, so we are looking forward to seeing an application. The devil, of course, is in the details.”

NextEra is ahead of the game, already winning two bids and approval from two towns.

Its site in Fitzwilliam was one of the six projects in the New England Clean Energy RFP. On the whole, solar was favored, since it satisfied the renewable requirements of the participating states: Massachusetts, Connecticut and Rhode Island.

But what was bid won’t necessarily be what will happen. Antrim Wind Energy was one of the winning bidders in the New England tri-state RFP, but it pulled out of the process and announced plans instead to sell its 28.8 MW of power to the NH Electric Cooperative and Partners HealthCare of Boston.

(The state’s Site Evaluation Committee ruled in favor of the project at the end of 2016, but opponents are challenging the decision in a lawsuit currently in front of the state Supreme Court.)

And the Fitzwilliam project was downsized due to concerns over wetlands. NextEra does have a power purchase agreement with utilities from the three states.

But the $30 million project, located on 355 acres, is behind schedule. The initial applications were supposed to be filed in the first quarter of the year but have yet to arrive at the SEC. NextEra spokesman Bryan Garner still says the project should go online in 2019.

A NextEra project in Concord is one of 25 (and the only from New Hampshire) selected in Connecticut’s RFP for small-scale renewable projects. It was downsized from 15 MW to 10 MW, also for environmental reasons, according to Garner, who said the project should also go online in 2019, but nothing has been formally submitted to the city or the state.

The project in Hinsdale, known as Chariot Solar, would be bigger than both the Fitzwilliam and Concord projects combined.
NextEra acquired the project from the original developer, Ranger Solar, which won approval from the Hinsdale Board of Selectmen, with a pilot agreement of $10 million in revenue over the first 20 years of the project. At the time, it was 65 MW and would cost $50 million and create 185 jobs, according to news reports.

That’s more information than NextEra is revealing now in its heavily redacted bid. But Garner said that the plant will start generating power via the same infrastructure that once transmitted nuclear power from Vermont Yankee, in 2020.

NextEra and SunEast both emphasize that they don’t build on speculation — they need long-term contracts. And that depends on the results of the latest Massachusetts 83D RFP decision, to be released in January. That RFP hopes to “wrap hydro around” more intermittent solar, in the words of Bob Grace, managing director and president of Sustainable Energy Advantage, which gave the presentation at the Oct. 10 Energy Summit.

Since Massachusetts has certain renewable goals that have to be met by 2020, projects that are more mature and less controversial have a better shot.

Solar also comes with some uncertainty. A key trade complaint brought by two solar cell manufacturers in the United States might result in large tariffs imposed on imported solar cells, which could make solar arrays less economically competitive. That decision, in the hands of President Trump, is expected to be made Jan. 12, just weeks before Massachusetts has to choose.

But losing a bid doesn’t mean a project dies. There are other rounds of RFPs to come from Massachusetts, Connecticut, New York, perhaps even New Hampshire.

The Massachusetts RFP allows other states to “tag along” by either eating the “leftovers,” after Massachusetts takes its share, as Grace puts it, or to share the capacity on some of the larger projects. Rhode Island, Connecticut and Maine already have that authority.

So far, New Hampshire doesn’t and is not considering it, especially in light of a recent decision by the NH Public Utilities Commission preventing Eversource from using a long-term power purchase agreement with Northern Pass, citing concerns that ratepayers would be stuck with stranded costs.

In 2016, Sen. Jeb Bradley introduced Senate Bill 128, which would allow the PUC to look at such long-term contracts and approve them if they were in the public interest. The NH Sustainable Energy Association initially opposed the bill, but didn’t take a position on the latest version, which was retained.

“It can be a good thing if the PUC can determine it will lower costs,” said Epsen of the association.