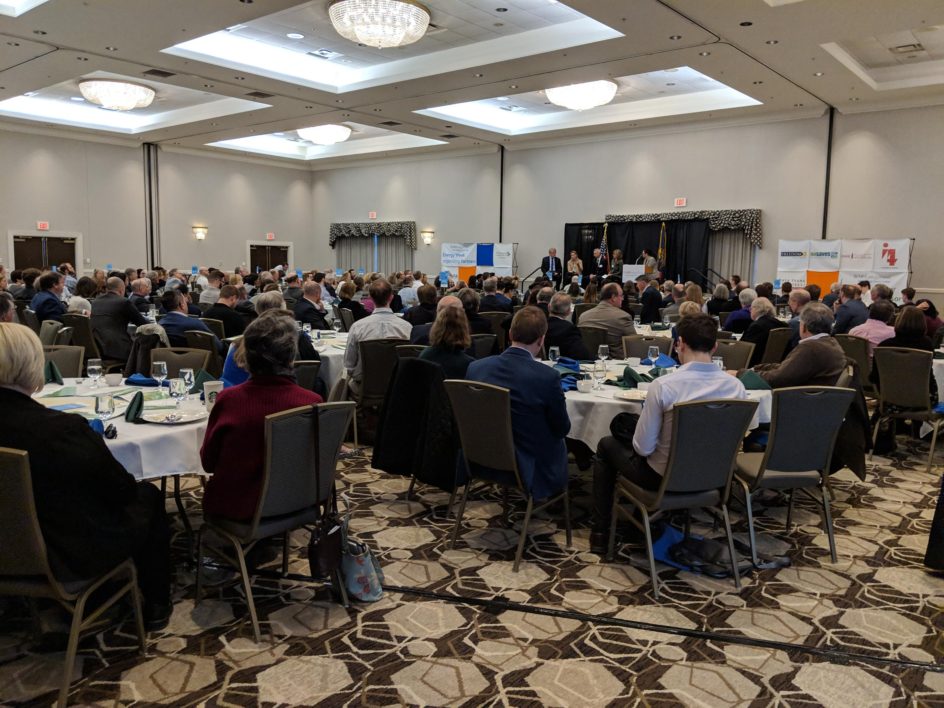 Energy industry players announced big plans for the future of New Hampshire’s electric grid at a conference in Concord Thursday — even as some progressive energy ideas continue to stir controversy in state government.

A major offshore wind developer says it plans to explore the possibility of involving Pease International Tradeport in its business.

While White says turbine development off the Seacoast is at least four years away, he notes:

“The reason we’re here meeting with people in New Hampshire is to say that we actually think the technology’s going to evolve, such that we could actually build economical, affordable offshore wind that can generate jobs in the New Hampshire economy.”

He says the next generation of wind turbines will have to be built on the coast, because they’ll be too large to move over highways.

Advocates say Pease Tradeport could support that manufacturing for the Gulf of Maine. White says his firm plans to look into it.

Charlotte Ancel is in charge of clean energy strategy for the company. She says that in 1990, Eversource had 2,000 of what it calls “grid-connected generators” – power plants and customers, large and small, who are making power and putting it onto the regional grid.

NHPR’s Sam Evans-Brown, left on stage, interviews EnBW North America director Bill White about offshore wind development in the Gulf of Maine.
CREDIT ANNIE ROPEIK / NHPR
Now, she says, they have 125,000. And she says that number will continue to grow “exponentially.”

“Like all revolutions it’s not easy – it’s messy at times,” she says. “But our vision of what the future grid for New Hampshire and actually for all of New England is pretty clear and it’s pretty simple.”

Ancel says half that vision is about large-scale renewable energy. The other half is about new systems and programs to lower demand for electricity, instead of building more poles and wires or power plants to supply power for a higher level of demand.

Alongside these efforts, she says Eversource is prepared to build a corridor of high-speed electric vehicle charging stations in New Hampshire as soon as next year.

The conference is put on by Clean Energy N.H., the Nature Conservancy, the sustainable business lobbying group Ceres and other players in state energy policy.

Sununu said then that his energy strategy would let New Hampshire “have our cake and … eat it too” on encouraging renewable development while lowering energy rates.

But since then, Sununu has sparred with Democrats and sometimes Republicans on how to make that happen. He’s promised to veto many pro-renewable bills in the works this year, arguing they would raise rates.

Conference organizers say Sununu was not invited to speak at this year’s conference because they want to alternate years in which the same headline speakers appear at the event.